The History of Ashura

Muharram marks the anniversary of the Battle of Karbala. Imam Hussain Ibn Ali (AS), the grandson of the Prophet (PBUH), and 72 accomplices were killed by the forces of Ummayad Caliph.

Yazid demanded Imam Hussain’s allegiance to him, however, Imam Hussain refused as he was fully aware that the rule of Umayyad’s was unjust. He left Madina to seek refuge in Makkah in AH 60. He then travelled towards Kufah as the Kufans were writing him letters and giving him their allegiance. However, at a place near it known as Karbala, his caravan was stopped by Yazid’s army. Yazid’s army then brutally killed Imam Hussain, his companions and family members including a six-month-old named Ali – Asghar. After this event, they tortured and imprisoned the women and children of the holy household. 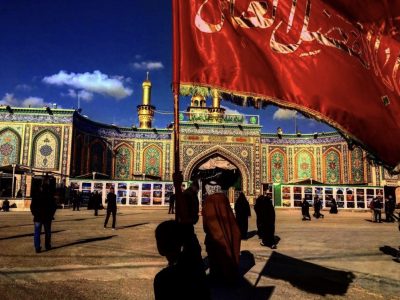 Why Do Muslims Mourn for Ashura?

The reason as to why so many Muslims commemorate Ashura,(10th of Muharram), through, mourning, processions, matam (chest beating) and self – flagellation, visiting the shrines and much more is to express the emotion of grief as well as to stand up against the oppression and injustice Yazid ibn Mua’wiya stood for and remember it for years to come. There have been many sacrifices made in the past, however, the reason why the events of Ashura are remembered and continue to inspire Muslims, as well as Non-Muslims, is because the joint efforts of the Ummah to keep the memory and message of Hussain alive.

How Imam Hussain Impacts Us As Muslims

Imam Hussain stood for social justice, freedom, fairness, equality, and peace. This is why as Hussainis we try our best to spread positivity and do as much good as we can.

At Al-Kawthar our aim is to help those that are needy such as the widows and orphans in Iraq. Since we are commemorating Muharram, we’d like to think of the martyrs, women and orphans of Karbala and offer our condolences to the Imam of our time, Imam Mahdi (AS).

We would also like to encourage you as our reader to donate any amount that you can to Al-Kawthar.

“Your guardian can only be Allah – and His messenger and those who believe, who establish worship and pay charity, and bow down (in prayer).” [The Holy Quran, 5: 55]